It’s been far too long since I posted something on this ramshackle blog. My pile of shame seems to grow no matter the circumstance; have a kid; buy into Batman miniatures, work overtime; buy into Star Wars Legion, have another kid; buy swathes of old lead (to be fair that last one never really stops), Covid knocks the world on its ass; actually paint something? (gasp!).

I suppose it took being barred from doing anything outside of the house but yes, I’ve finally gotten started on a 3rd edition Chaos Army. Although, to be fair it wasn’t really Covid at all.

Sometime in 2019 I’d messaged the admin of the old world army challenge asking to be included in the group’s next endeavour and then promptly forgot all about it. If you haven’t checked out the old world army painting challenge - DO, you won’t be disappointed. During a bi-weekly search of Facebook I received his reply asking if I was interested in joining. Was I though? Honestly I haven’t played a game of anything old school since 2017. Hell I haven’t had a game of dark heresy since then either, so did I still have it in me to take on a project? Was it even going to be fun at this point? I have no time to paint with work (now deemed essential), kids, wife, life. But I figured why not, I’ll give it a go, but once I started leafing through the 3rd Armies Book the old feeling came back. 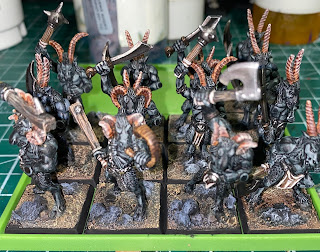 At first I thought about my dark elves, then I started looking through realms of chaos, eventually I perused some old white dwarfs (old for me) when the tale of four gamers articles jumped out at me. Paul Sawyer’s (Fat Bloke, man that name would not be printed these days) Beasts of Chaos Army from that era the most incredible looking armies I’ve ever laid eyes on; the contrast between the jet black skin tones and off white assorted garb really pops. You also have to consider it’s from the 90’s a time when GW armies were either red or insanely brightly painted with goblin green bases! His painting was fresh, and his writing is quite good, IMHO. It was settled. Chaos with a Sawyeresque (Blokesque?) paintjob (I cant paint as well as him as I cannot highlight black worth a damn, see my eldar weapons; any of them - shiver). 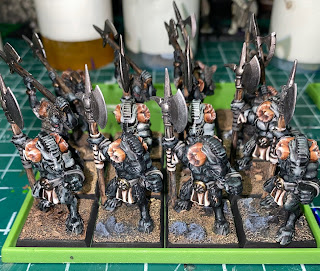 I opened up a box of shame in my hobby room, took stock and started piecing together an army list. This is the most enjoyable part of the hobby for me; creating an army that fits my narrative and will be fair to my opponent; I want them to have fun as well without having to engineer a grand tournament worthy army list just to have a chance. Let’s crack a couple beers, chat, and have the only pressure applied be on our livers, not on camaraderie.
Of course I quickly flunked out of the old world army challenge; an invasive surgery threw a wrench in the works for me. I realize everyone that takes part in the OWAC overcomes real life to make it through, so I make no excuses. Congrats to all those that triumph. Maybe next year, maybe dark elves. 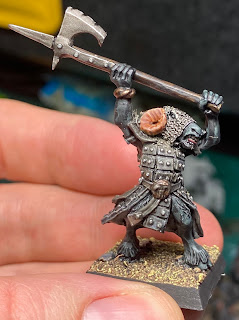 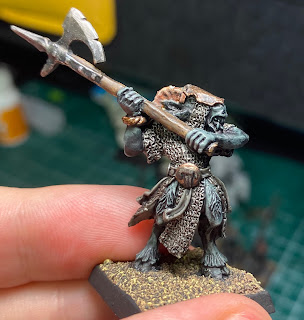 In a way though flunking turned out better for me, as I had originally plotted an army list containing Chaos thugs, well a lot of thugs really; mounted thugs, shooty thugs , flail wielding thugs, double handed weapon thugs, you get the idea, and only a handful of beastmen. Sometime in February I changed gears and committed to a cloven hoof army of beastmen and Minotaurs, well perhaps with a sorcerer as beastmen shamans are a lot of points more, they are pretty competent in close combat over other mages. Even without casting hammer-hand? Digress.
For the army I wanted good sized units ~ not mighty avenging lord of chaos 30+ but big enough to survive a round of shooting and last awhile in close combat. I also wanted more that just hand weapons, I also had halberdiers, and double handed weapons with standard, musician and a leader in stock, I wanted to use them! I realize my figs aren’t everyone’s cup of tea; they’re circa 1996 and are all goats. If I had thousands of dollars lying around for 50 beastmen from the 80’s to buy off eBay I’d be all over them. Hell, I’d have a whole damn unit of flamingo men, but I don’t. These are the line of beastmen figs I grew up playing against and Ive always wanted an army of my own. They have an old school vibe to me, that may be nostalgia talking. At least they’re all metal (mostly).
All of these figs were purchased “used” off eBay (mostly in 2011) painted in varying states or in disrepair. I stripped the paint off all of them (except my plastic halberdiers) and had to pin most of them to their bases.
I don’t mean to go off on a tangent but I do my best during assembly; I always fill slota-base insert corners with putty, usually tamiya but I’ve even used blue poster tac.  I’ve seen a lot of armies with models that have gaps between the insert tab and the edge of the slotta “slot”. I want my models to stand straight up; sometimes adjusting the tab isn’t enough and  a dab of putty to bind them in place works great. I’ve never had a puttied model break apart either even when dropped from 5 feet or so, on plastic figs it does help to add a bit of weight as well. More than anything assembly related; even more than 10 part plastic models; it’s mould lines that I despise most. I’m pretty diligent that I “wipe them out - all of them”. Once that tedium is over they all get a rinse/bath in warm soapy water before putty/glue assembly so nothing gets trapped under the primer. I based them carefully with a mix of stuff in a tin I’ve been adding to for a long time; chopped cork, GF9 ultra fine, fine, medium sediment, beach sand from all over the Caribbean and Mexico, even glitter as I find it is super duper ultra fine. On a few models I super glued woodland scenics small talus stone in place then used watered down PVA for the sandy mix. When using a tub full of different mediums you get some bases more heavily modelled than others. But doing so adds a lot of variety and great detail with virtually no effort - glue, dip, brush or shake excess, wipe rim with finger (or paper towel - if you’re Guy’s friend, MWM reference there).
I really think these small assembly steps make a huge contribution to the overall finish. I’m keenly aware that I’m not the best painter, so it’s unfortunate seeing paint jobs far ~ FAR superior to mine kind of taken down a peg by mould lines or falling forwards or back or maybe worse an untouched base.
Once painting is finished and some matt varnishing they will get flocked and tufts will be placed liberally. Shields will be done en masse somewhere down the line. 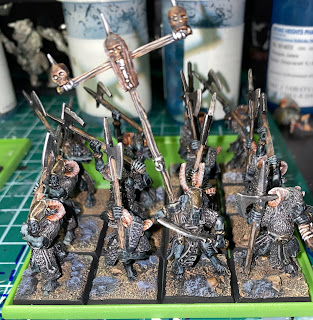 And so here we are 3 months later and I’ve managed to get 41 beastmen painted and based to 90% completion. I still have some small bits to pick out in greater detail and the skin tone is not consistent enough for me and the bases need highlighting but at least I’m enjoying coming back into the hobby, I hope to post every month, perhaps bi-weekly if I make good progress (just NOT so long a read next time).
Thanks for reading, thanks for sticking around really, I hope to catch up with a lot of your blogs soon.
As ever; Thanks for stopping by!