They look kind of shitty 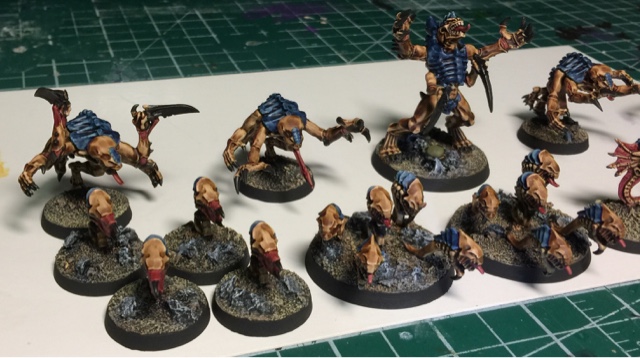 But isn't the idea of a speed paint to get shit done? 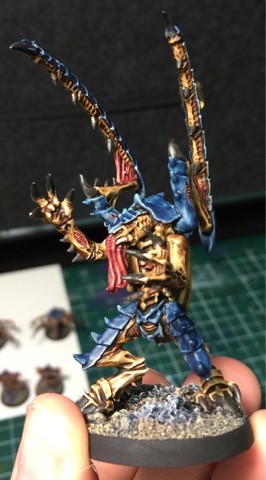 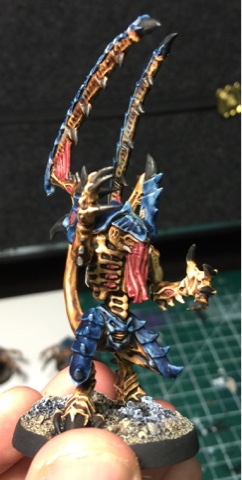 Kind of disappointing. Onto the next!
Thanks for stopping by!
Posted by 24_Cigarettes at 19:28 17 comments: 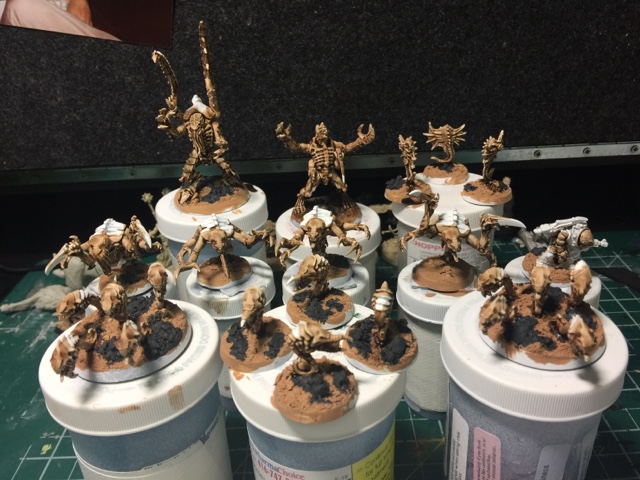 Low and behold, the fledgling vanguard of my Hive Fleet; Spectre with around two hours of work put in using a fast wash approach. These will be used in my amigo's excellent dark Heresy game soon hypothetically. I know they're not strictly speaking oldhammer but they've got an OG hybrid and a trio of ripperjacks from the necromunda Wyrd Beastmaster range; hard to find figs for a reasonable price; not one to brag but I got them in a job lot for 15 cents for all 3, Oh happy day. They look like GW versions of face-huggers ala Aliens to me. They're a bit big for 28mm but they are absolutely perfect fo Inquisitor 54mm, a game which I am positively enamoured by. The sculpts themselves are quite nice, a shame WYRD beastmasters were not popular in necromunda as these are the first I've laid eyes on in person.
This army is an exercise in speed painting, they've all taken to the wash very well. The most fun I've had in awhile was putting the ripperswarms onto 40mm circular bases, the lines are quite clean with no sediment overlapping on them and I believe their poses give the illusion of movement.
There is a good selection of vanguard organisms here; stealers with feeder tendrils, implant attacks, scything talons and rending claws which will add some diversity in the darkheresy game and provide a bit of spice in the painting. Ive included a lictor just because they're my favourite tyrannid organism of all time, the OG sculpt with feeder tendril is NOT my fave but I do love the deathleaper! Some rippers with spine fists will provide a little ranged action for the GM and keep the players on their toes.
I've got three battleforces lying around, if I continue to enjoy painting them I might crack em open, speed paint em up and hypothetically re-enact the tyrannid attack on Iyanden against my Eldar space pirates; that would be grand indeed!
Another 6 hours I would say at the most before they are playable; I've come to the realization that as a father I must tightly budget hobby time; I've got to start using speed painting techniques or I'll have nothing to show for it and after 2016's dismal performance I've got to step it up. These figures aren't going to win any golden daemons but the only way to get better at speed painting is to practice, but once you can speed paint the hobby world is your oyster.
Do you like the effect thus far? I'm digging it especially considering the quick turn around.
Hope you're all enjoying the new year and thanks for stopping by!

2016 has held my greatest accomplishments and lowest moments, I've gained a son and lost a father. Time will never heal these wounds and everyday feels like a blessing.

2016 has been a real double edged sword, luckily I have my hobby and good friends to hold onto. Some of you out there have no idea of the joy perusing your blogs brings to me; oldenhammer in Toronto, lead plague, somewhere the tea is getting cold, blue in VT, the privates eternal, chaos demons 40k, mr saturdays mumblings, takes from the big board, classic 40k, rabs digest, snikkit's tale and of course warhammer for adults are just to name a few that have really been a highlight on some of my darkest days and so I thank you.
I did manage to actually paint a couple of things; Vescin First Born my dark Heresy character 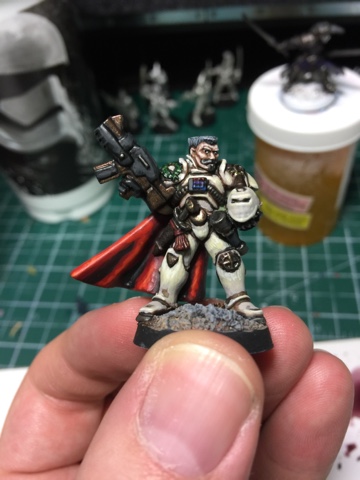 He's in his 5th career and now an inquisitorial legate investigator quite a step up from a lowly guardsman. I have a great GM who allows our team to investigate every facet of a mission which is what I play for, and on our own terms. So far we've remained covert and is very rewarding to play. Going in guns blazing does not fit the bill in my mind for secret agents of the Inquisition better to get in do work and be gone leaving no trace.Our games have great terrain and lush figs. I really enjoy all the background fluff which rewards meta game knowledge. 1st edition is where it's at for me, the new one has the ridiculous principle where you can buy skills and talent so from one unified list; better to be confined within your career I say. Otherwise it feels like a video game on paper which has no appeal to me.Be warned Dark Heresy is not for the faint of heart and death can come quite easily, the 41st millennium is unforgiving.
Ive also finished vanqual my elven envoy from whfrp 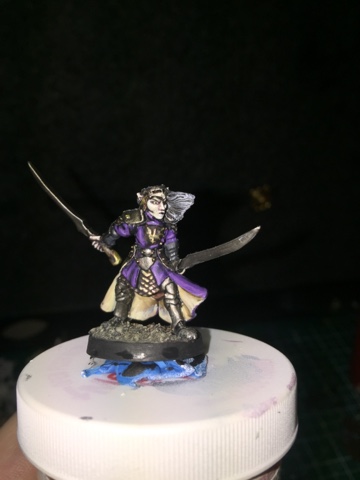 Not my favourite game system but better than nothing. Long live D&D 3.5 I say 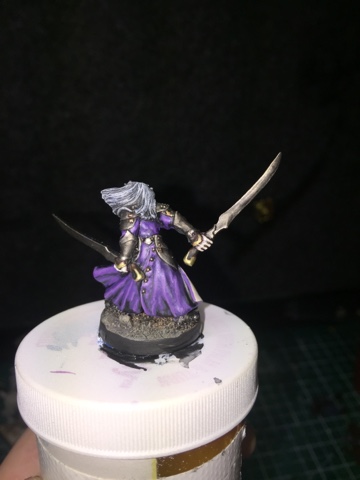 Ive tried to apply new techniques on both models and strive to make common practice. Each figure was completed in a single evening and I will attempt to put a half hour in everyday (Baby permitting) I will soon purchase a light box for better photos. Next up is my Genestealer cult, fat running patriarch here I come! I'm using the build from the yellow compendium not this deathwatch overkill crap although the cultists from dark vengeance are ok I guess. I'm on the hunt for an original magus with staff, the other with pistol and the payer with large head. If you have these and are willing to part I'd be delighted.
Thanks for stopping by. Enjoy 2017 friends!
Posted by 24_Cigarettes at 21:20 11 comments: 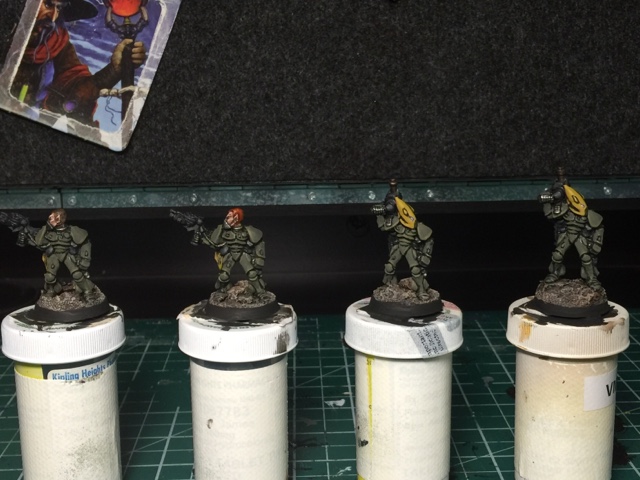 Another 4 Eldar finished, 2 in powered armour and a pair with missile launcher (to be used as heavy plasma gun in dragon squads) 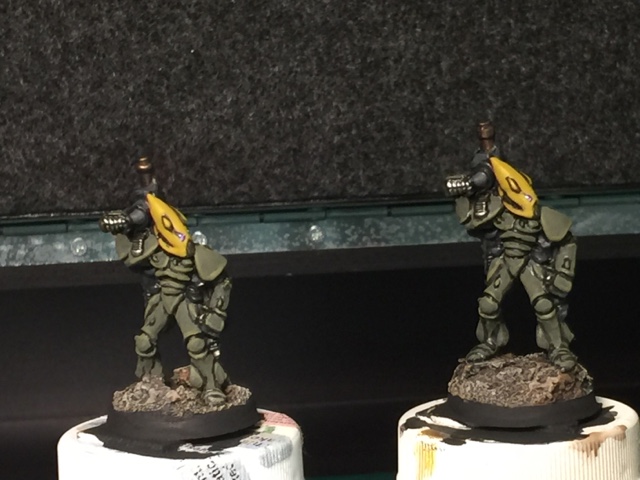 Yet again I've changed the painting execution and I believe these to be the best looking troops in the army thus far! 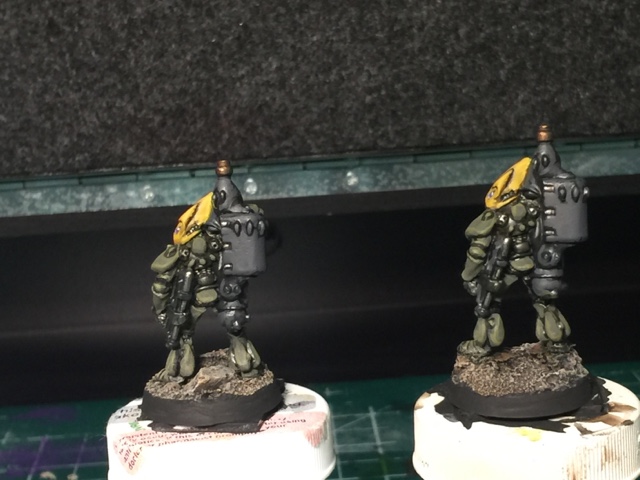 That is not to say these are exceptionally well painted; far from it. What sets these 4 apart from the others is the uniformity  of the green basecoat (XF 74 Tamiya). I've learned now the more uniform your basecoat is the more your fine line highlight will pop. All I have to do now is go back and repaint 25 figs.
Nup. 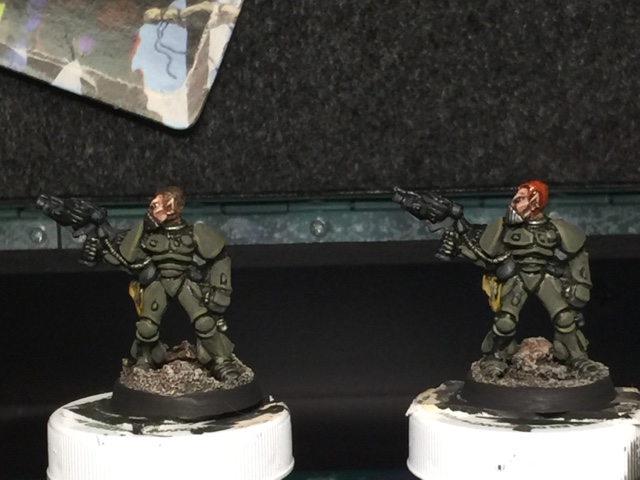 This sculpt is really epic, not only does it help with WYSIWYG for the Vyper squad (powered armour and shuriken catapult) but the pose itself is dead hard; as it should be considering the lethality of the shuriken catapult! 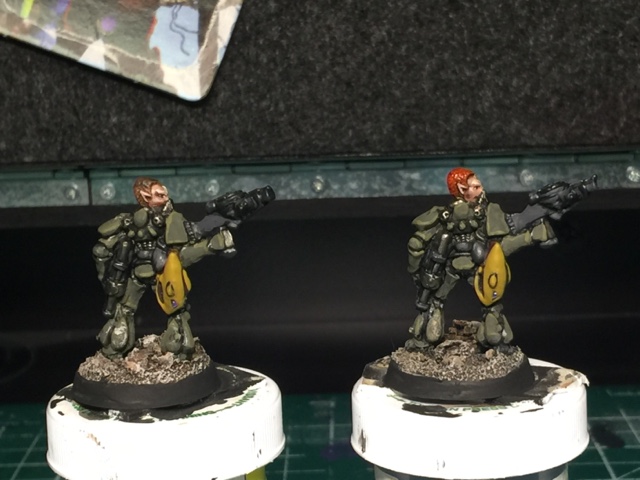 I think the lenses turned out fairly spiff as well. This brings the army to 29 painted figs, 6 to completion.
I am extremely burnt out with space elves and I'll be switching gears to a small antagonist project for a D&D 3.5 Campaign I've been mulling over for a very long time.
Regular service to resume shortly (HA!)
Thanks for stopping by!
Posted by 24_Cigarettes at 06:01 9 comments:

Another 10 Eldar Pirates finished. These have been on the table for far too long. 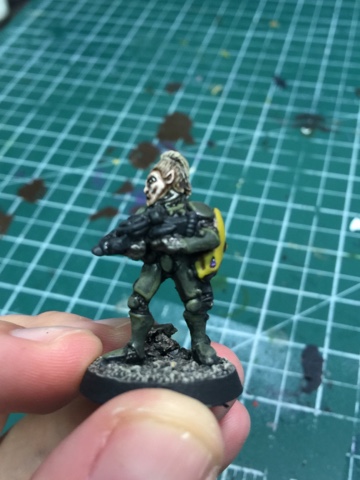 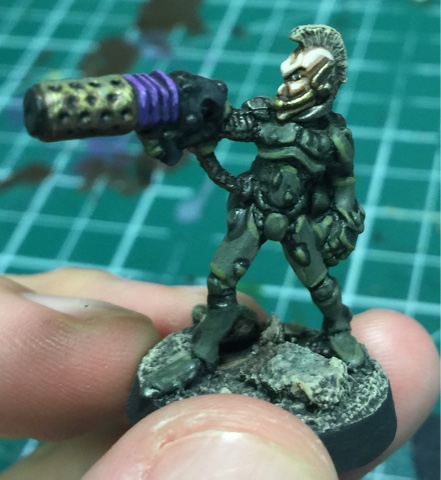 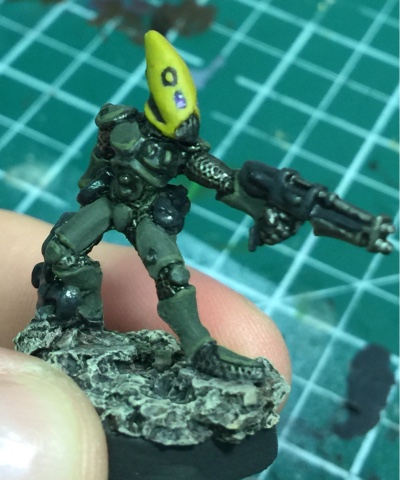 A nice warrior with lasgun.
These paintjobs aren't my best however in the grand scheme of things it really won't matter. 11 more to go and the infantry is finished, then on to a pair of war walkers, 5 dreadnoughts, 10 jetbikes, ghost warriors.
No es bueno.
Thanks for stopping by.
Posted by 24_Cigarettes at 16:24 17 comments: 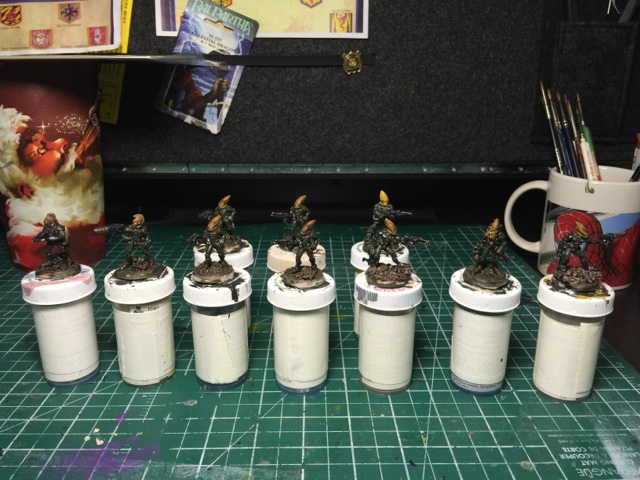 It's been forever since I've posted, sincere apologies to you, my dear readers. I feel even worse about not following those to whom I subscribe; a true travesty, I am filth. Not the good Nurgle filth, I mean the 3rd edition Wood Elves filth, the kind you can't wash out.
I never make them but this time I have an excuse... 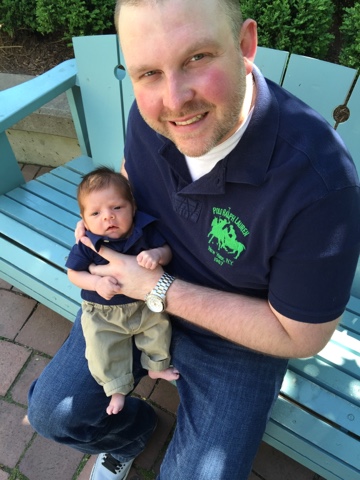 The greatest joy in my life arrived. I cannot say how he's enriched my life, and just over a month old and 62cm long, I hope the Alpha Legion, if not the Dark Angels are recruiting.
Enough of that; Here's a work in progress shot of my Void Dragon Eldar Pirates. 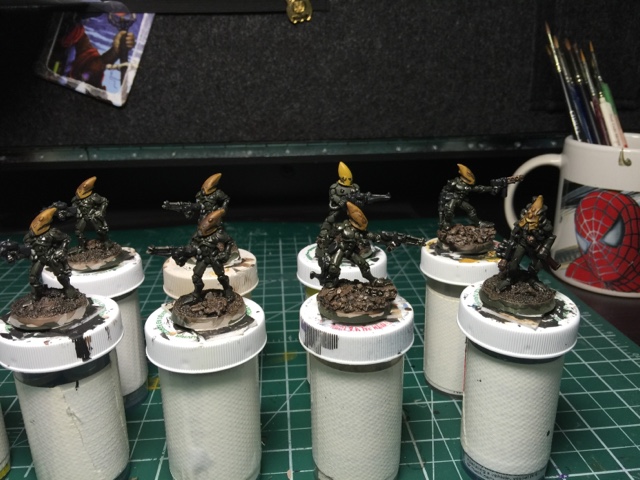 I know, reduced to WIP shots, what has this Blog come to? Next it will be "look what I bought" posts.
Disgusting.
I've got to say, the Rogue Trader Goodwin Eldar are the best ever sculpted. Period. If you disagree, beat it. Of course all the detail makes these guys a pain in the ass to paint compared to my beloved Skaven; such a joy, strangely they're nearly all Goodwin sculpts as well, God I miss them.
In that vein I got my big bastard repaired and pinned; 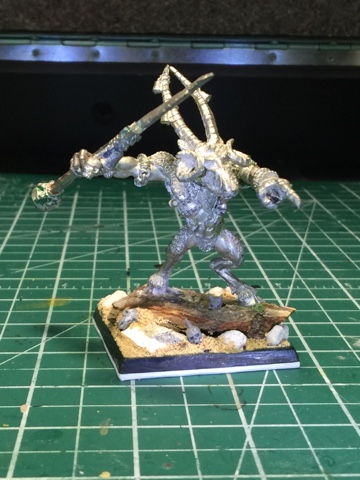 Once these 10 Eldar are done I will get him finished. I can't wait to give my caster a scroll of summon greater daemon and see what happens, with my luck he will turn into chaos spawn.
Thanks for reading feels good to be back, hopefully within the next couple weeks I'll have more.
Thanks for sopping by.
Posted by 24_Cigarettes at 19:10 19 comments:

It's been 4 years since my simple little blog got started; in fact my last post was my100th, a poor one at that; however I've finished my third Eldar squad, a much needed dragon squad with heavy melta gun!

They turned out ok 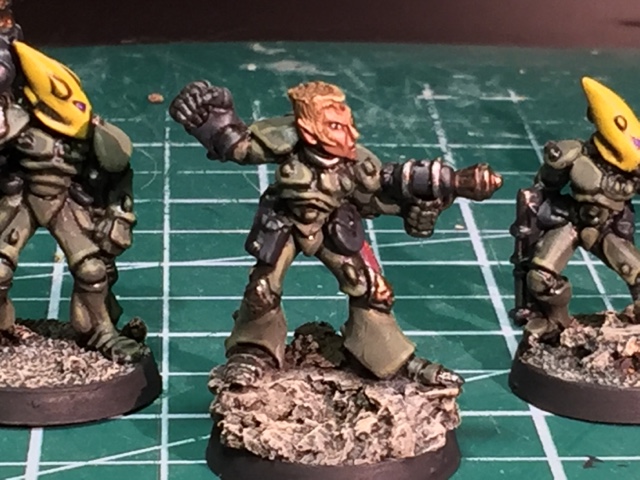 Leader close up, I can't explain how nervous I was sitting his eye but I think it turned out pretty good 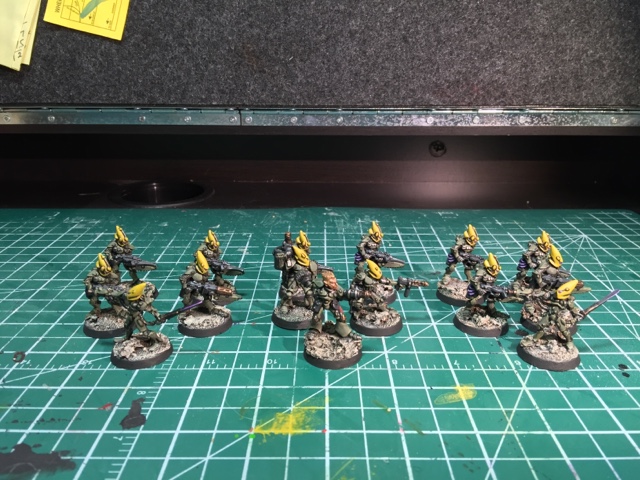 The formation grows...
Here's a shot of my latest acquisitions; I hate " look what I got" posts but it's my birthday so Excuse me. 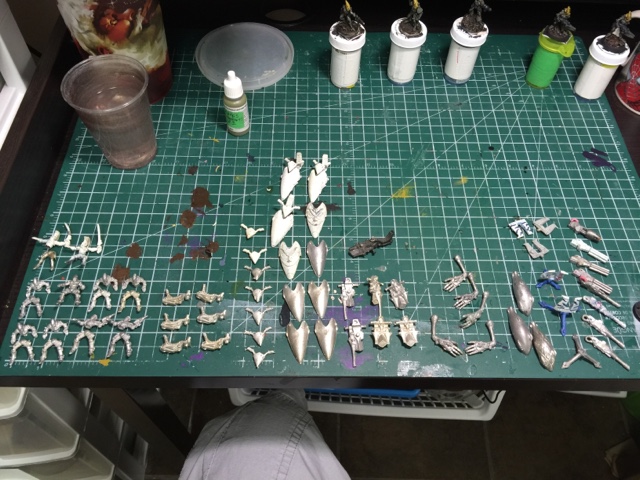 A massive reinforcement has just arrived in the post and I couldn't be happier.
Looks as though I'll not be changing gears army wise, The Eldar are my army for 2016 and it should be well over 5k once completed.
My good "All things role playing" mate died in a bike accident, today is his birthday, 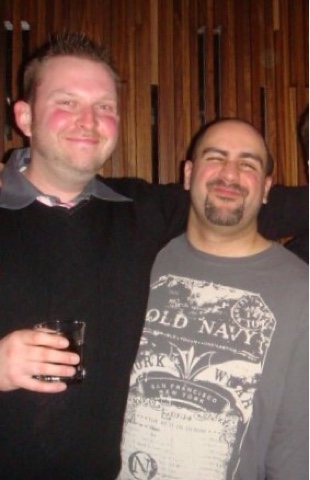 We love you Lighter! (on right) even though you played sisters of battle, you are missed brother!
Thanks for reading
Posted by 24_Cigarettes at 16:56 12 comments: