It took me awhile but I've finally got some movement trays constructed. You may be thinking who cares but they're a big deal to me aesthetically.  Much in the same way a well painted fig always looks that much better on a finished base, the same is true of a unit on a movement tray. 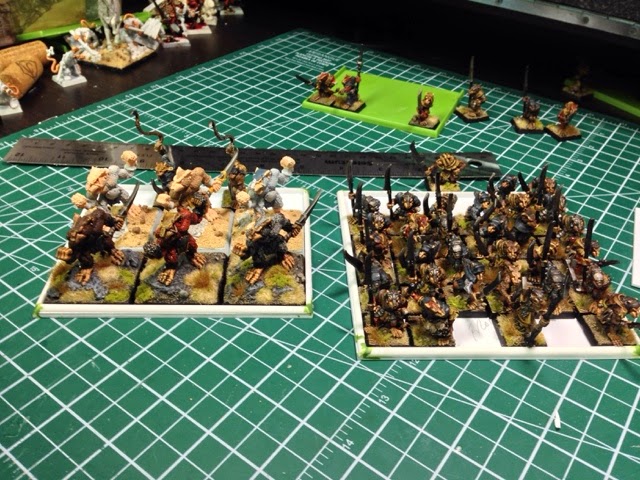 I knew what I wanted; the platform had to be thick enough to handle the weight of large(ish) units, the frame had to stand even height with citadel bases and had to be reasonably thin. I searched the web but nothing quite fit the bill. To be honest and it pains me to say it the closest I could find was the kit from GW but the price was offside (shock) and the edging was too thick for my taste. I could settle or make my own; the choice was clear.
The platform was made of 2mm thick plasticard from Evergreen, good quality stuff and the large sheets are reasonably priced. For the framing I intended to use 3.25mm quarter round but was informed Evergreen had ceased to produce it and that Plastruct made no quarter round at all. I compromised by gluing 2.5 quarter round onto 1mm thick stripping which added to the workload.
I made the first three without the use of a carpenters square which was a pain in the ass, now that I have one I can see how useful it will be in the future.
All of the tutorials I could find said to leave 2mm extra room length and depth on the platform; it's not that big of a deal for 40mm bases but for multiple row and rank units it is a must; a fraction of a millimetre per base can add up quick.
For cutting shaped plasticard I would recommend a fine saw as applying force will cause it to dimple and the usual score and crack method will not work with two separate pieces glued together, you could always premeasure the strip and the quarter round before gluing but if you are off by a quarter millimetre you're boned.
The corners were then filled with green stuffed to leave everything flush.
This was my first project with plasticard and the results will stand up to the rigours of gaming. I've got a few more more to do for a 3k force but I want to get back to painting, nothing exciting just more Clanrats and rat ogres, the army is finally halfway painted!
When the army is done ill work on the remaining movement trays and getting them finished using Blue in VT's method, the same I emulated on my unit bases.
Cheers.
Posted by 24_Cigarettes at 17:40