I've neglected my skaven long enough. Mr. Saturday's post last week really opened my eyes to the unfortunate reality that time, especially time for wargames is finite. I've had the majority of these figs for over a year and they've been my principal focus, but they still aren't done. This is inexcusable. I'm pissed, more so regretful that I've not got them done. So, I've got my second batch on the go: 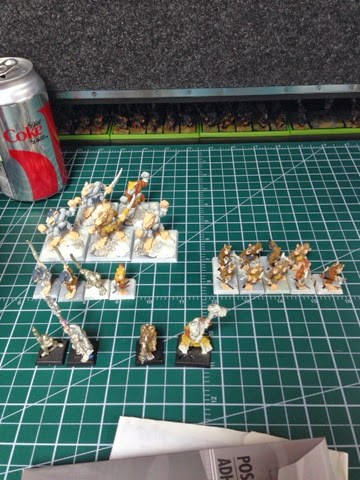 I've got four projects that I've got to get finished before I croak.
Maybe by writing them down it'll give me the impetus to get my ass in gear and stop fragging about.
1: 3k+ skaven 3rd edition, with terrain depicting the successful conquest of a slann temple with stepped pyramid, desecrated spawning pool and some lavish jungle sections.
2: The Kinstrife Project: High elves are and always have been my first love. Their history is what makes the warhammer world. They stopped the warp-gates collapse, they defunctly created their dark kin, and their abandonment of the old world created the wood elves, they taught the first of the human mages how to control the winds of magic and much much more.
Anyway I want to do a 3 part campaign depicting an dark elf invasion of Ulthuan. I've got my favourite high elves already; war wain, wardancers, 4th edition spearmen and archers (from the original big box) and a pair of bolt throwers and the marauder silver helms. Naturally none of it's painted. I've got all the dark elves I'll ever need: 8 original cold one knights, 24 crossbowmen from 4th, and 40 of the 4th edition corsairs with 2 sets of full command. But the terrain is what really has me excited; I'd love to do a 4 foot long beachhead section (how often do you see something like that?) about a foot deep and just really take my time wet blending the depth gradient and micro thin layers if wet effect. I'd also love a 12" inch tall Ulthuan tower. If like to create an eldar warp gate as well.
3: Beastmen 3k+: I love beastmen of all types and I've got about 80 metal ones.  30 with double handed weapons, 20 with halberds and I've got 12 minotaurs with two standard bearers (totally not worth their points but that's another story) and 10 centaurs (which are totally not worth their points either) and, wait for it: 3 chariots.
Pricing them out came to 92pts a pop with scythed wheels, beastmen with shields and war boars. None of it painted.
If you've read the "tale of four gamers" in WD 218-223 then you've seen Paul sawyer's beastmen. They are phenomenol. I'd love to do mine the same way. I'd like a heavily gnarled set of forests and a burned out empire settlement all done in a winter theme.
4: The Battle for Macgagge in Epic40k.  I've got a bunch of space marines (2 companies worth) only 10 rhinos a company of land raiders and 3 whirlwinds. I'm trying really hard to get a pair of thunderhawks and a company of terminators. None of it painted but I think I'd pass on ultramarines and go for post heresy dark angels and keep the painting interesting with deathwing and (eventually) ravenwing.
I'd like to splurge of a bunch of Onslaught miniatures tyranids and an alpine mat from Frontline gaming. I've seen one up close and man it is nice. I've got 2 sets of the classic cardboard buildings with plastic tops, that coupled with some vast stretches of coniferous trees and some bunker emplacements would complete the look. Some hills done like these:
http://www.3t-studios.com/archives/2642
Would be the bees knees.
So that's it. A bit long winded but I had to get that off my chest. The projects are not impossible. I can't crank out the gargantuan armies like Chico or Goblin Lee and definately not with that kind of consistent quality on each troop.
I'm incapable of the works of art created by Don Hans, Blue in VT or Nico.
I gotta find a happy balance, sit down every day for at least a half hour and grind, because that what painting these skaven feels like now.
I should mention my 5th and most important project would be getting across the pond for the oldhammer weekend.
Someday.
Wish me luck God knows I'll need it.
Posted by 24_Cigarettes at 20:19